I've recently followed a path that many other people in the Linux gaming seemingly have taken. Namely, I got into Valheim. I've kept hearing good things about it, but I got into it only after I got sent a copy last week. Over the last weekend I have managed to already put nearly 13 hours into it. Needless to say, this has basically destroyed any of my productivity, so I'm going to rattle off a couple of things about the game here.

Valheim's core idea is pretty simple and not actually that unique. It's a survival sandbox in a Norse mythology setting where you must gather resources in a procedurally generated world, craft items and explore new parts of the world for new enemies to kill and new loot to find. Along the way you will need to construct houses, forts, ships and unlock new tools to become more powerful. None of this is very original, I'm pretty sure I've even seen a viking survival game with similar gameplay mechanics before.

There are, however, certain things that set Valheim apart. First of all, for an early access title Valheim is extremely polished. The forests, meadows and coasts it generates are absolutely beautiful and combine with the light and fog effects to create scenery that approximates very well how real forests look like. I remember when I sailed along a coast in the middle of the night and seeing the outline of the trees covered by a layer of fog really reminded me of some of my summer cottage trips. I don't remember when was the last time a game made me hit the screenshot button this many times. 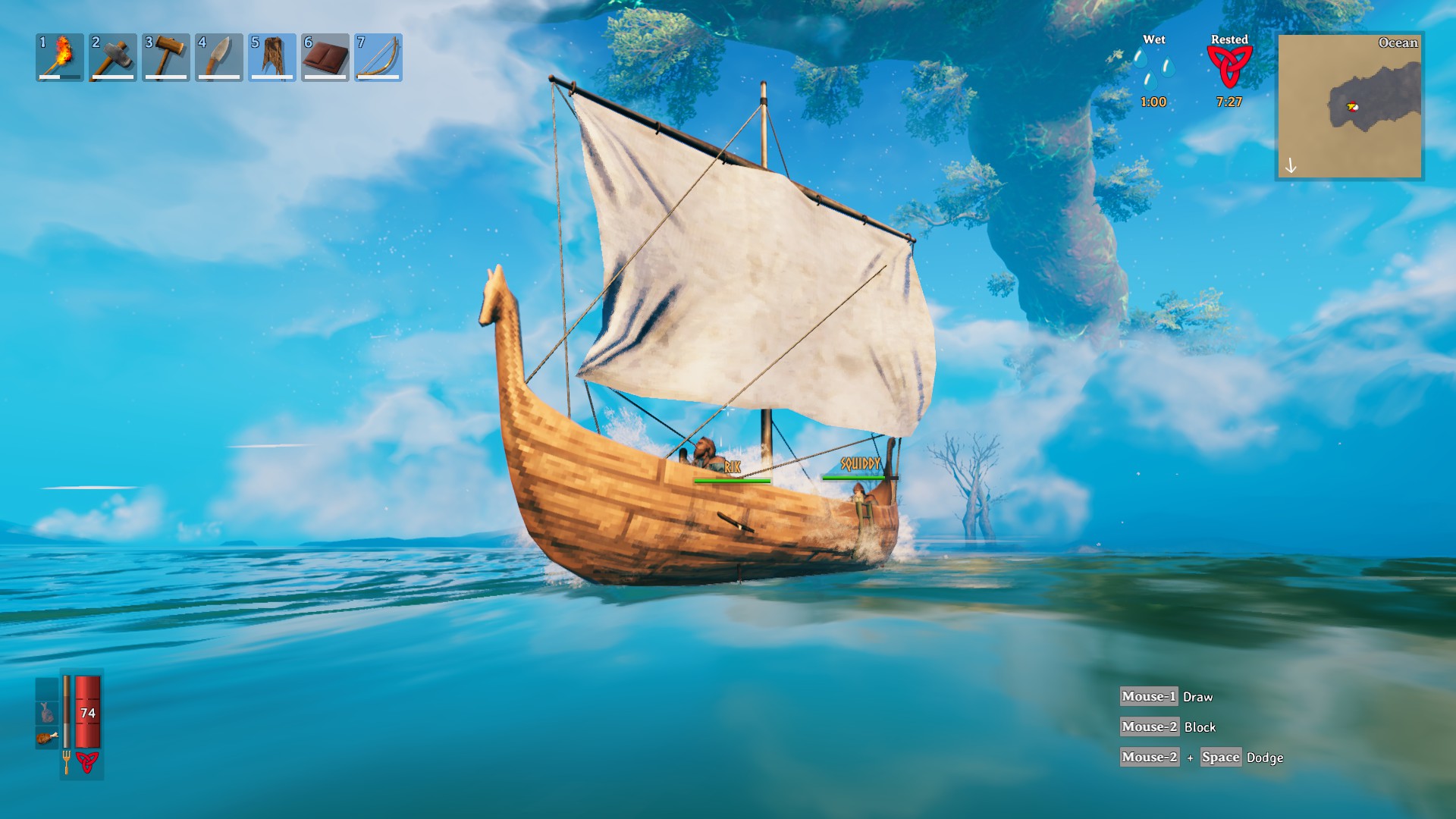 The second thing that makes Valheim so great, in my opinion, is its approach to online play. Valheim has a very flexible online multiplayer system, where you can at any point open up your world to online play with a couple of people. So, you can at will jump between singleplayer and multiplayer. However, what makes this even sweeter is how Valheim deals with player characters.

Typically when you join someone's multiplayer server for the first time, you will need to start from scratch. This means that the first hours on a new server involves playing catch-up with the rest of the players as you try to get some basic gear together.

Valheim's approach here is different and sort of similar to Borderlands. Your character file is stored locally and when you join someone's server you join with all of your skills and items that you've collected thus far. This may seem like a small thing, but I would argue it changes the dynamics of multiplayer entirely and makes possible entirely new kinds of co-op interactions that I haven't seen in many games before.

I started playing Valheim on my own and I was struggling a bit to learn how everything worked, and it didn't help that I got harassed by a bunch of skeletons on my first few nights. So, I decided to try some co-op with Liam from GamingOnLinux to get a better grasp of the game. Liam has put way more hours into the game and had by that point already unlocked a bunch of items, stable sources of resources and faster ways of getting around.

All of this meant that Liam was able to fast-track me through some of the early-game grind of collecting rocks and sticks and soon enough I had an inventory full of food, a fair number of new tools and some resources to kickstart technology in my singleplayer world. Valheim's online system had basically given me an alternative to grinding my gear by instead cooperating with a friend, which also allowed me to see many of the cool later-game features like ships, portals and deadly swamps. We also went on a few very cool troll hunting trips. 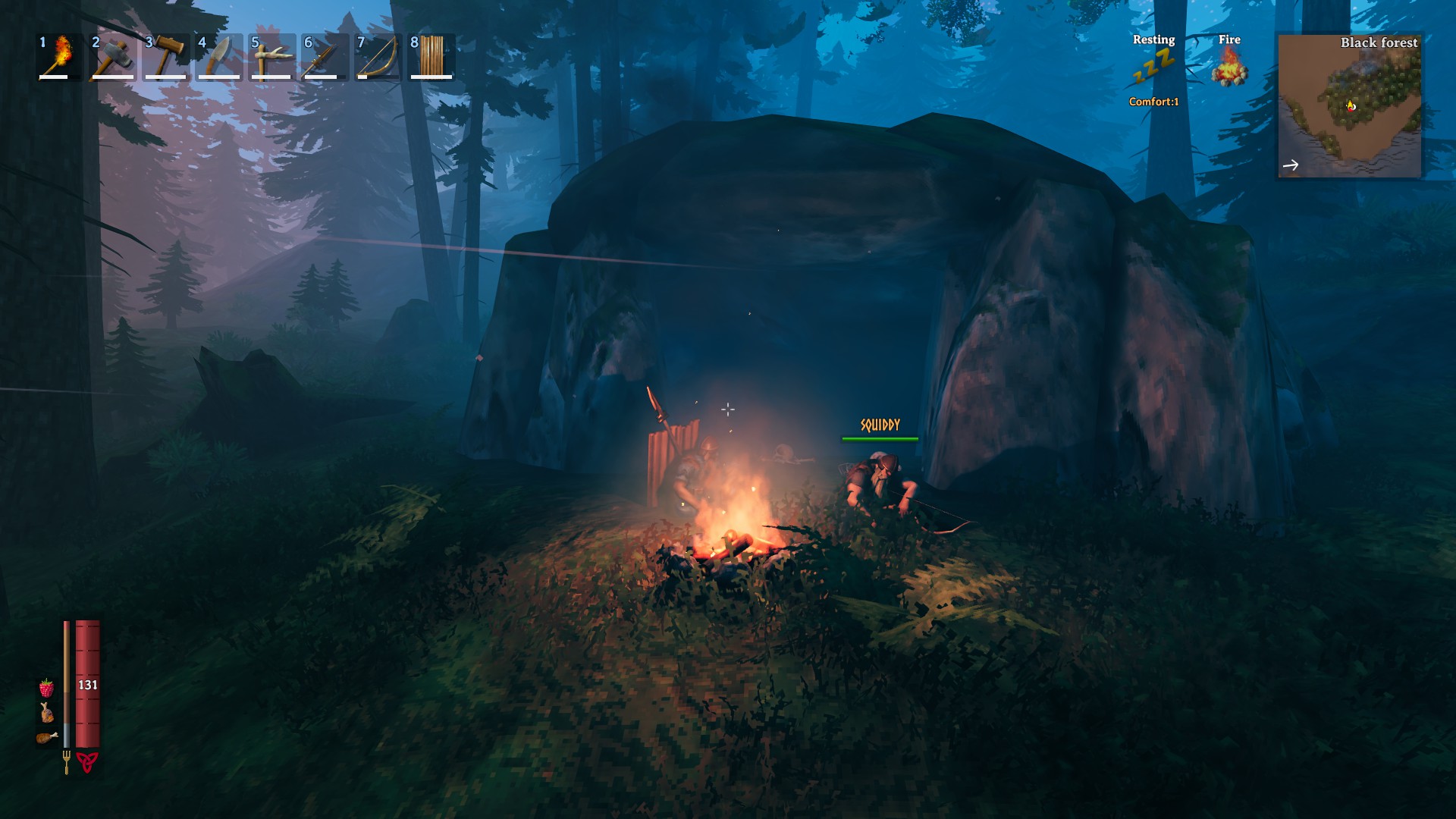 Liam also mentioned to me that apparently some people have organized groups that you can call to assist you in getting your stuff back after you die in a particularly tricky spot. I think that goes to show the sorts of cool player interactions this sort of a multiplayer model makes possible.

Fluidly moving between different worlds while keeping your inventory also means that it's not a problem if I cannot play with someone for a bit. I can work on my skills and equipment with other people or on my own and then take that stuff into co-op later on. I can visit some people's worlds even if I don't necessarily know if I can commit to playing with them more than a single session. I can help out my friends when they are starting out with Valheim and ferry some useful items between my world and theirs. And if I absolutely want to start over from scratch, I can just create a new character alongside my old one.

So yeah, Valheim's been pretty great. Not that many survival games have managed to hold my interest after the countless of hours I put into Minecraft, but Valheim is still going strong to the detriment of my productivity. I would highly recommend playing it, but I think at this point it's very likely you already know about the game and have either bought it or are planning to.